The abdominal aorta may develop an aneurysm, or abnormal dilation, which puts patients with this disease at risk for aneurysm rupture and immediate death. An aneurysm of the aorta is similar to a garden hose that develops a weakening in the wall and creates an out-pouching of the rubber lining under pressure. Many famous people have died of ruptured aneurysms, including Albert Einstein and Lucille Ball. It as a manifestation of peripheral vascular disease, and is related to smoking and hypertension. They are typically asymptomatic, sometimes totally silent until rupture.

Abdominal aorta aneurysms are typically considered for repair once they reach a certain size in diameter. Typically, 5cm in diameter is the time repair is considered. However, in smaller people, including some women, or in situations where an aneurysm has shown rapid growth over a short amount of time, 4.5cm may be the time to repair.

Traditionally, aneurysms were repaired with open surgery, but this is associated with a higher mortality (death) and morbidity (complications) than with minimally invasive EndoVascular Aneurysm Repair, or EVAR. 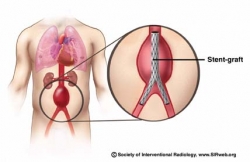 With the EVAR procedure, the aneurysm is repaired by placing a stent-graft (a stent covered with graft material) within the aneurysm. The stent-graft is inserted over wires using very small groin incisions. Patients typically are in the hospital for two days, and back to normal activities within 1-2 weeks. Studies have shown that the complication rates of the EVAR procedure, including morbidity and mortality, are significantly less than with the traditional open surgical repair.

The procedure takes from 1-2 hours long and can be performed under general or spinal anesthesia. At Archbold, EVARs are performed by the cooperative efforts of vascular surgery (Dr. John Cascone) and a vascular interventional physician (Dr. Tim Daniel or Dr. Craig Yokley). They are performed in the multi-million dollar East Tower, which contains an endovascular suite specifically designed for this procedure.