Carotid artery stenosis is a term that describes a blockage in the main artery to the brain, the carotid artery, which is located in the neck. The blockage results from plaque build-up, just like blockages in the coronary arteries of the heart, or the peripheral arteries to the legs. The blockage may be silent until it causes a major stoke, or a minor stroke. The risk factors for developing carotid artery stenosis includes smoking, high cholesterol, and family tendencies to have the disease. 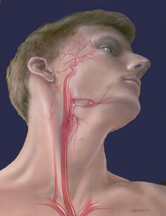 The longstanding, traditional way of fixing blockage of the carotid artery is with a surgery called endarterectomy, where a vascular surgeon cuts the artery open and removes the plaque. This is a very good surgery, with low complication rates in good hands.

However, it has recently been discovered that in patients that are at high risk for surgery, carotid stenting may have distinct advantages. These high risk factors include patients with blockage of the other carotid artery, blockage in a site that has already been opened surgically in the past (called restenosis), patients with advanced heart and lung disease, patients who have received radiation to the neck for treatment of cancer, and others. In these high risk surgical patients, carotid stenting is a better option because there is less chance of having a stroke or other complications with the stent procedure.